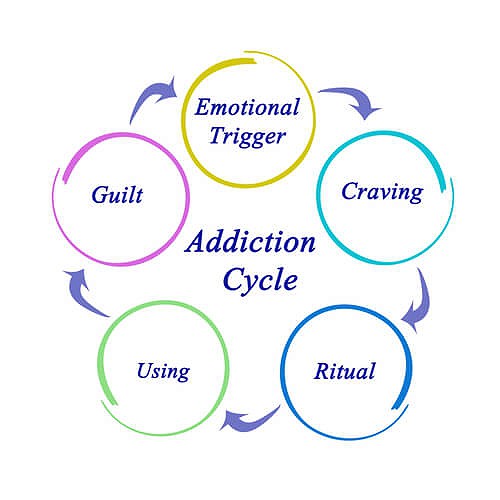 4 Behaviors that Occur During the Cycle of Addiction

The cycle of addiction starts with the initial drink or drug that will lead them to do things that they would not normally do had they not picked up in the first place.

A person that battles addiction at some point will usually become uninterested in their hobbies or normal interests. They might lose their job, dropout of school, stop paying bills, or abandon their children to keep up with their addiction.

Someone that continues to participate in their addiction will have lower Inhibitions. Drugs and alcohol will give them little restraint from participating in risky behaviors such as unprotected sex, using dirty needles, hanging out with dangerous people, driving under the influence, or stealing to keep up their habit.

Addiction causes an obsession of the mind and a dependency in the body that makes people that have an addiction put drugs and alcohol above everything else. Even though their consequences have gotten high they do not really care about anything else. Financial woes, relationship problems, and legal troubles begin to evolve to focus on the main concern of lessening withdrawal symptoms before they get overpowering. Logically the person may know that their actions are hurting everyone, including themselves, even though they continue to blackout, pass out, incur infections, paranoia, mood swings, depression, fluctuate in weight, and experience changes in sleep patterns. Addiction creeps in and consumes their entire life unbeknownst to them.

When the person with the addiction is aware of all the problems that have materialized they will come to a crossroads. Often people will refuse to stop substance abuse because they are in denial and will shun that their addiction could be the problem. Their thought process is that the world and the people in it have wronged them. Instead of affirming their part in the situation, the person that is abusing drugs and alcohol will stubbornly turn down the help that is being offered to them. Alternatively, they will draw a line in the sand of recovery when what they should really be doing is waving a white flag.

The cycle of addiction should be halted as soon as possible to avoid having to go through any of these behaviors. The first part of the process is to be aware that these behaviors are part of an addictive habit that can only be stopped with realization in lieu of contradiction.